Dva Vovky (Two Wolves) is a production team specializing in the development
and production of short animated films, video ads, and animated series
(2D and 3D animation), as well as motion graphics projects.

In February 2021, we finished work on the short animated film Slowny. In this article, we want to share our useful experience and findings that were used or found while working on the film.

We truly thank everyone who joined the work and cooperation. We personally thank producer Yuliia Radostina for inviting Illia Balykin and me to work on this project.

The main feature of this film in terms of creative and technical implementation is texture animation! The thing is known, but, as always, has its own characteristics of technological solutions in accordance with the creative concept of a particular project. Therefore, it was also a separate challenge for Illia and me.

Additional reasons for writing this article were also the lack of animation specialists and incomplete understanding of the processes and stages of production by the project participants. Therefore, we share our experience of working on a specific example.

I hope this information will be interesting and useful :) 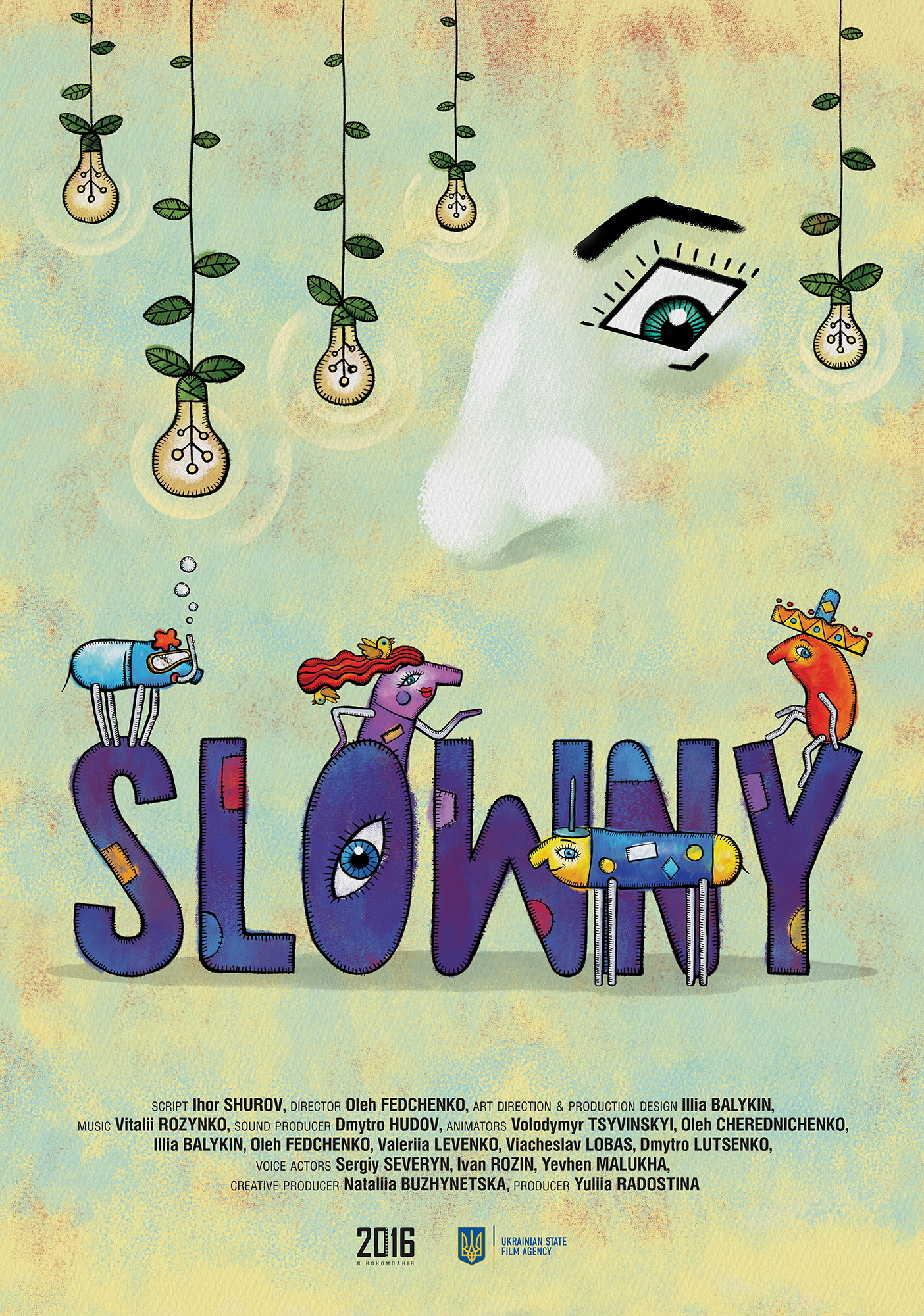 Search for the main stylistic solutions of the film and the characters. 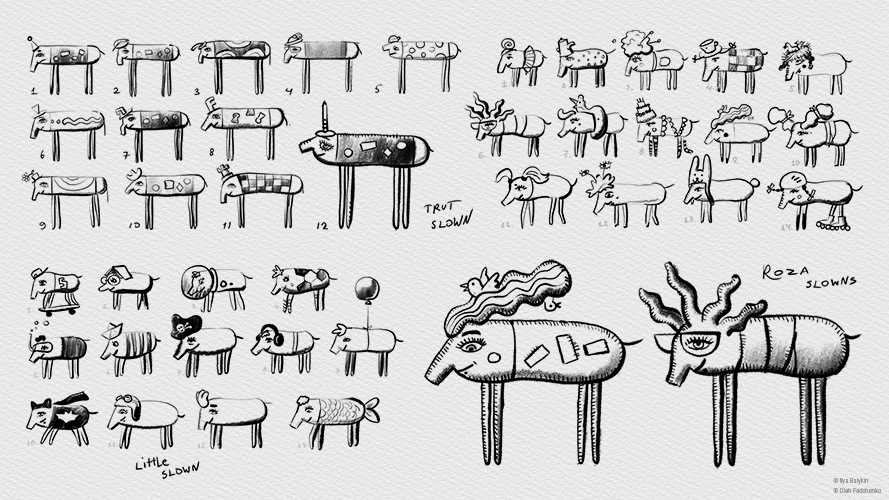 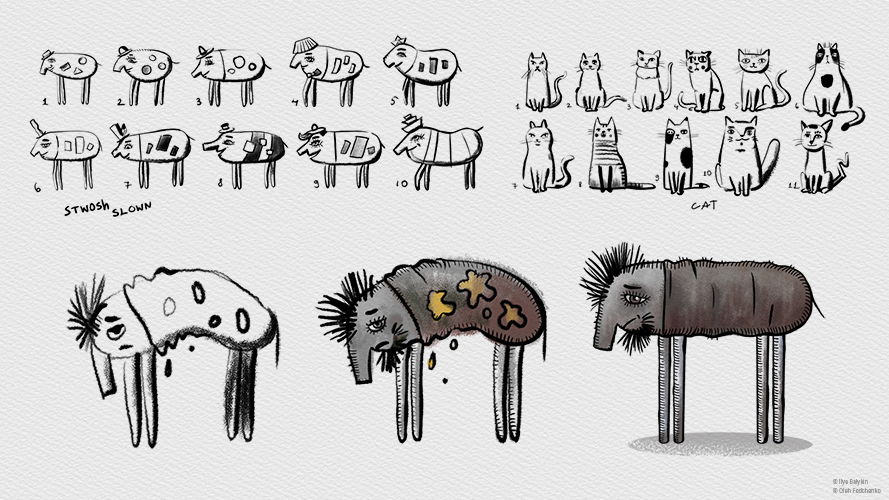 The film Slowny was based on the book of the same name by writer and artist Igor Shurov. The author of the script was the writer himself. There was also used the concept of stylistics based on illustrations to the author’s book http://igorshurov.art/ru/slown-s/.

All materials had to be developed in accordance with the script and features of the technology of animated film production, so the result was only inspiration by the book style (architectural elements, the characters’ overall image, etc.).

By the way, an interesting thing happened. Due to quarantine, some of the artists we wanted to invite to work on the film changed their work schedules and were already busy at the moment. Therefore, the circumstances were such that all the materials for the film (backgrounds, characters, elements for compositing, props—that is, everything) were painted by one artist, Illia Balykin.

To start working on the film, we first needed to understand the world of those amazing creatures—Slowny, find interesting things for their habitats, come up with appropriate locations, and most importantly—develop the characters themselves for animation. 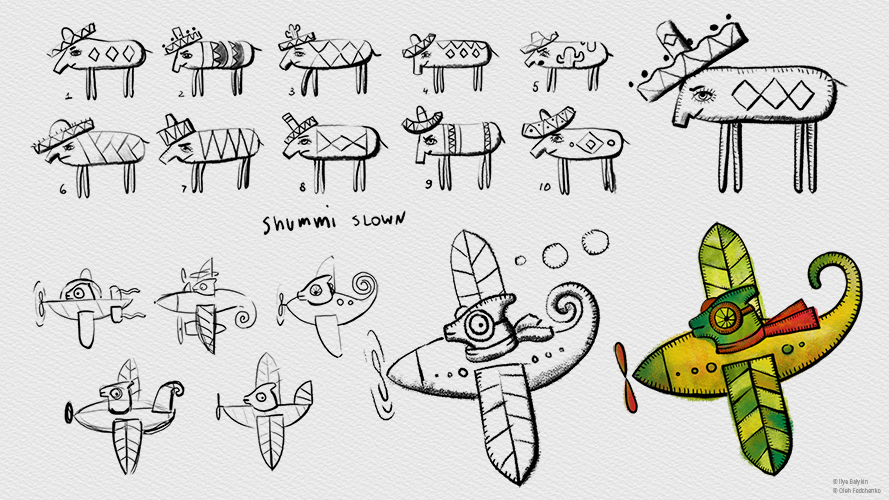 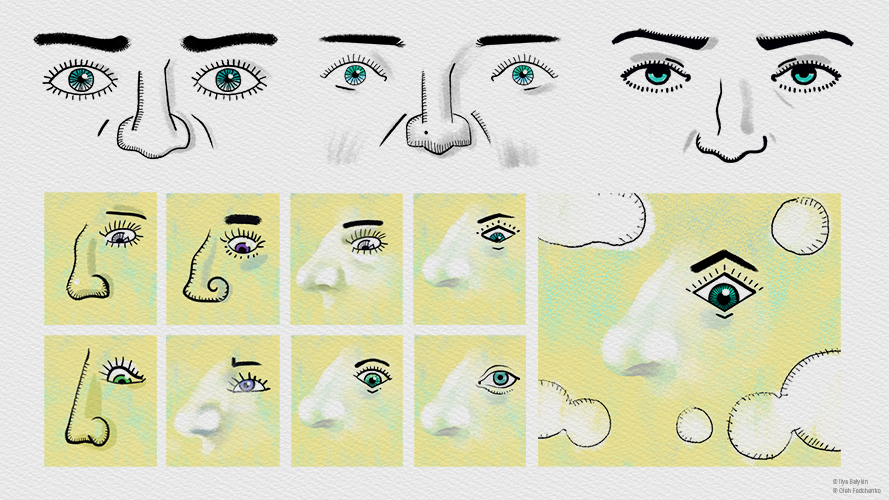 Initially, a test fragment of animatic was created for voice casting and auditions. That made it possible to better understand the characters and possibilities of the Slowny’s language and to start working on the characters’ sketches.

Work on the construction of their environments, the elaboration of history, and the director’s script was carried out in parallel.

Many variants of characters were offered. Most of the discussions with the producers took place remotely (unfortunately, the lockdown made its adjustments).

In my opinion, live communication is more productive because it is a better remedy for misunderstandings and “stepping on a rake” :)

Work on the director’s script and animatic for the film. 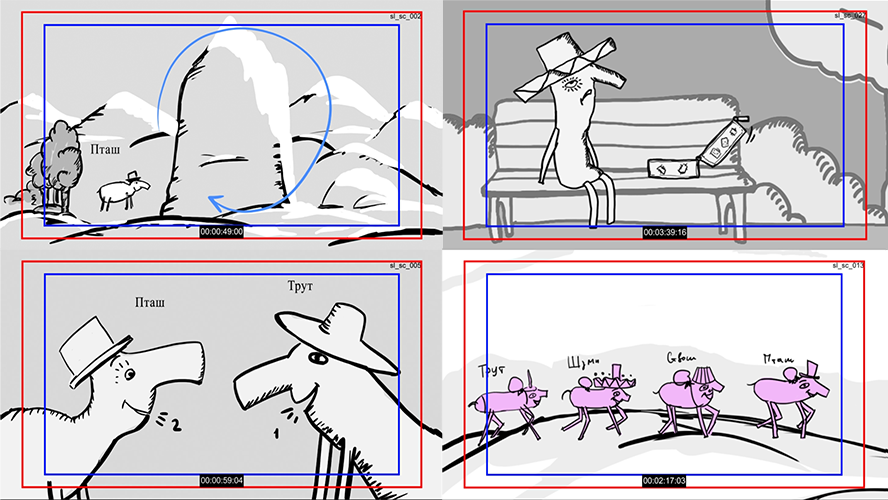 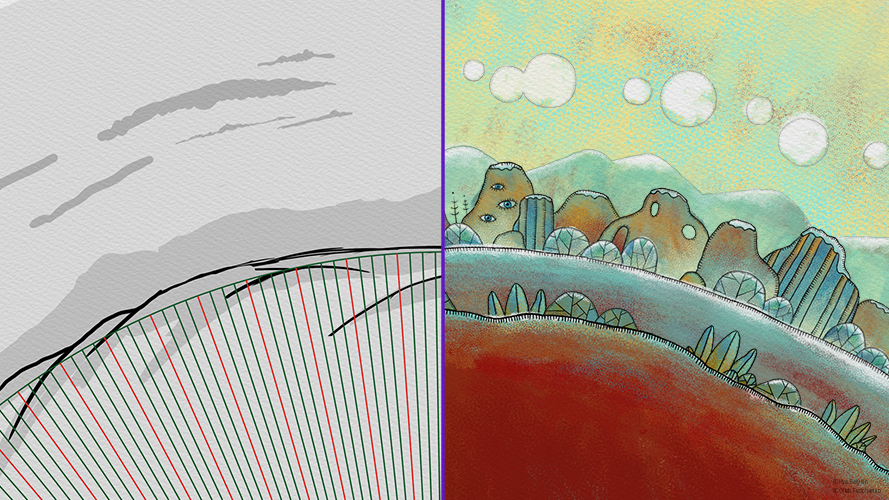 Working on the director’s script, it was necessary to solve several fundamental tasks:
- adaptation of the existing script structure to a full-fledged animated film script;
- finalize the script in accordance with the film timing, while not changing the author’s text (throughout almost the entire film, the author’s text works);
- understand and create the appropriate film style and animation of the characters;
- identify possible gags, develop, and emphasize them in episodes and artistic solutions with the help of backgrounds and entourage;
- make character arcs that would work both for the characters and for the story itself;
- develop transitions and “connections” according to the script which would combine individual stories into a single end-to-end in our unusual format;
- start developing the Slowny’s language.

Many solutions had been proposed in terms of sketching the story itself while working on the storyboard. But it should be said that not all the scenes then worked as interestingly as we imagined at that stage. For example, the circular panorama in the episode where the Slowny traveled around the world was quite difficult to produce, but in the film, it was not as spectacular as we expected. 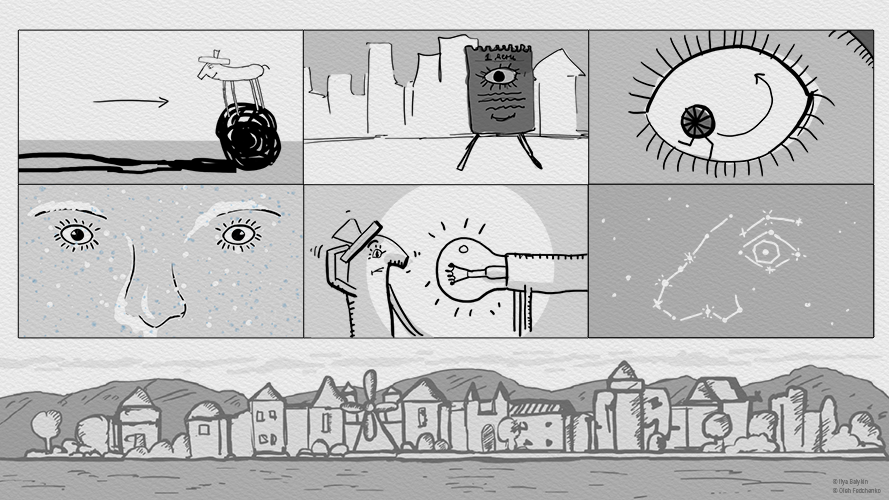 All that forced some episodes to be redone several times because the author’s text in many parts of the script was atmospheric which required the search for appropriate solutions. For example, panoramas for the author’s text, interframe transitions, gags, and much more.

2K Flat – 1998 px * 1080 px, 25 fps was chosen as the film format. That made it possible to further painlessly adapt the film to the Full HD format, as, for example, for television shows.

After the storyboard development, the work began on the film’s animatic, and a draft of the voice acting with replicas of the author and Slowny was recorded. I also used library noises which were then revoiced by the foley artist. In animation, all musical design was formed with the help of reference music. That made it possible to build the film rhythm and modulate the appropriate mood of the episodes. 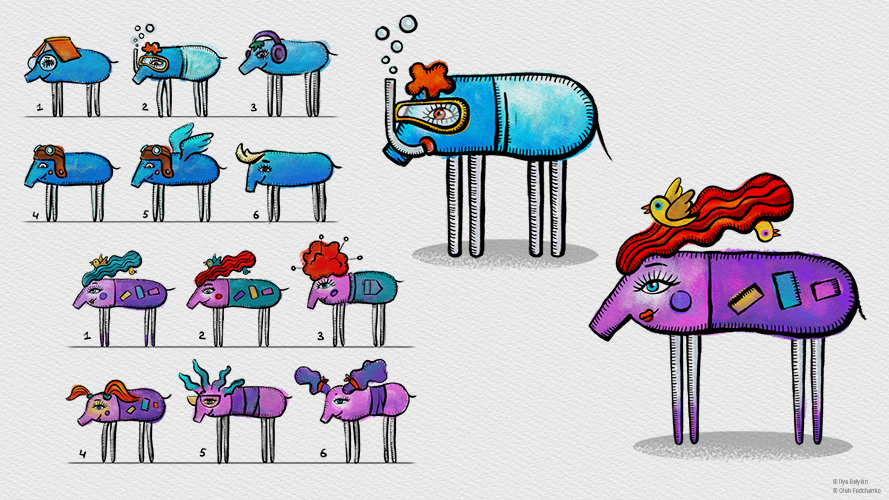 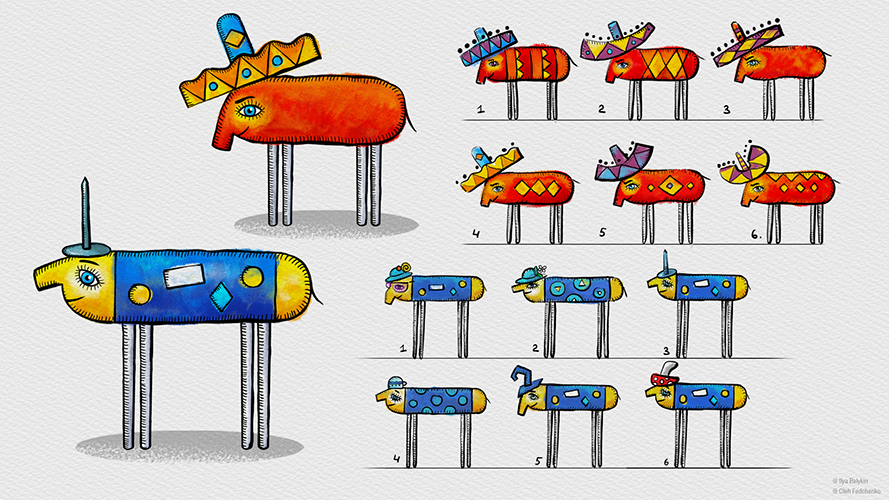 Many variants of characters in color were offered. I made the choice together with the project producers. But the final decision on the choice of character design was up to me (because there were own characters’ design features that influenced the future rigging). 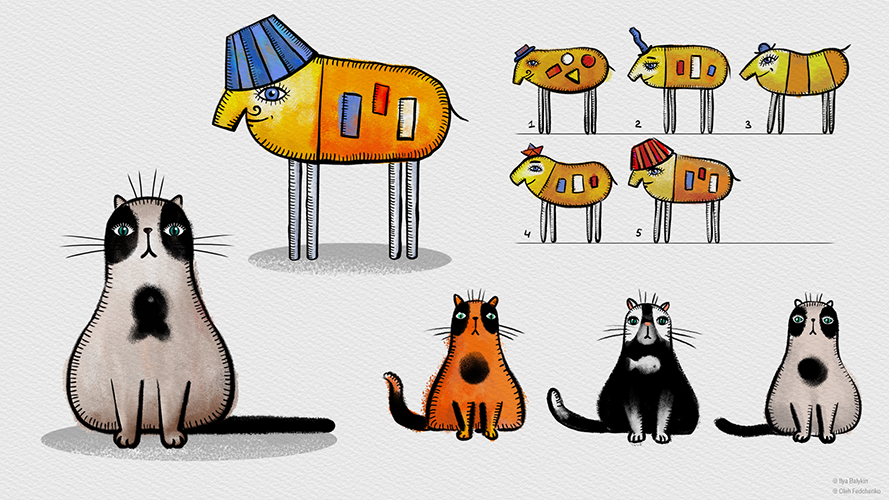 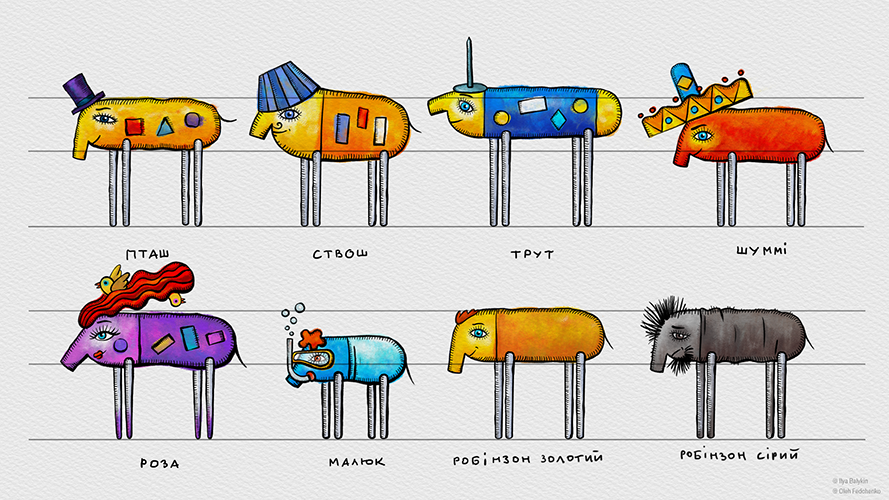 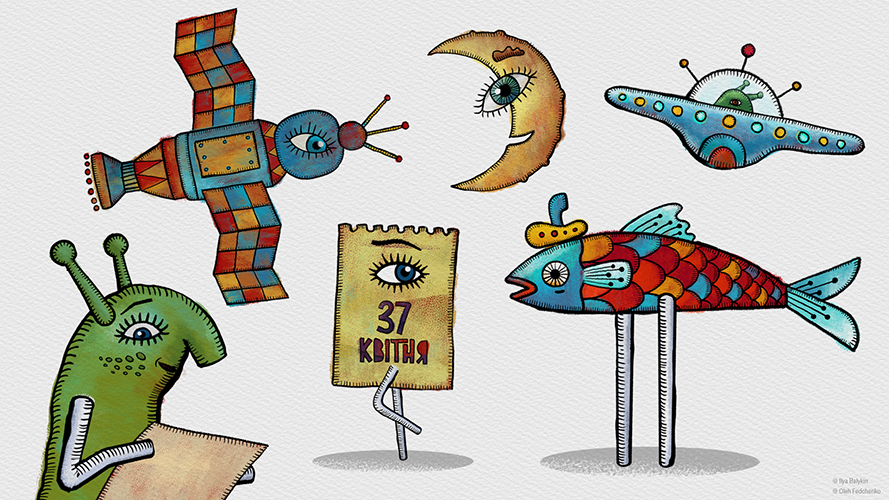 Several graphic brushes were developed to produce illustrations for the film. That allowed to further keep the film style and speed up the work on creating backgrounds and entourage.

At the same time, we developed a pipeline project and the film color scheme.

The characters increasingly acquired their own characters and attained “internal” working names: Floor-Lamp, Spaniard, Nail, Kid, and so on.

By the way, we used those names in our work much more often :)

Stylistic and compositional solutions. Working color sketches for the film. 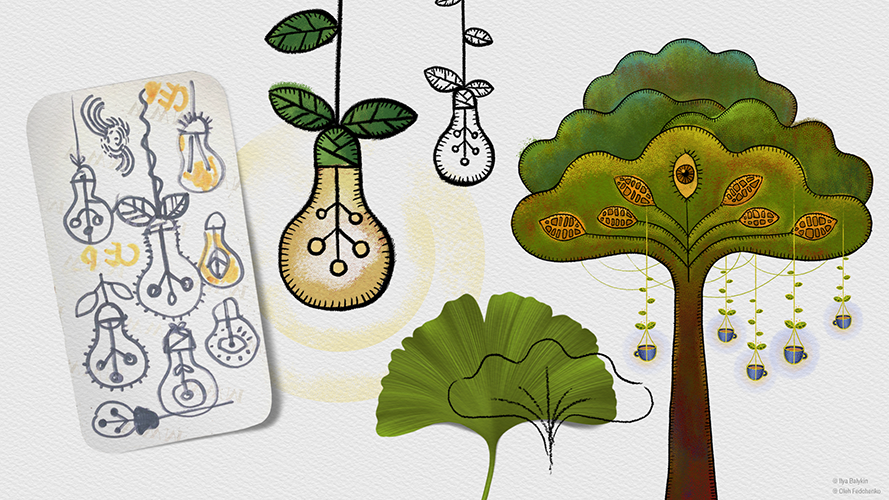 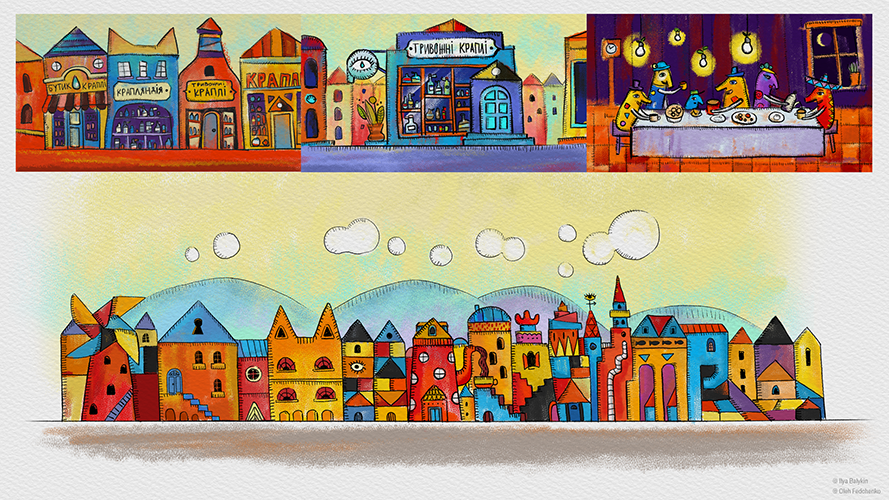 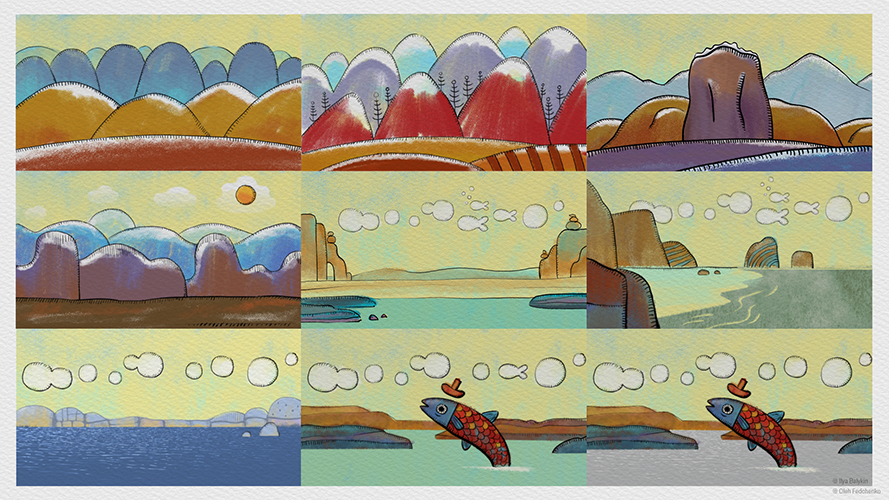 Many unusual locations and elements were stated in the script for the film. For example, a tree with cups of cocoa, a boutique gallery with “disturbing drops,” a favorite Slowny’s cafe, light bulbs hanging from the sky, an amazing city, the bay of the Crystal Sea, landscapes, and more.

Some sketches became the basis for the final solution in the film. But some had to be seriously redone while working. For example, the Slowny’s cafe eventually turned into an outdoor terrace with a table similar to a large turtle (see below). 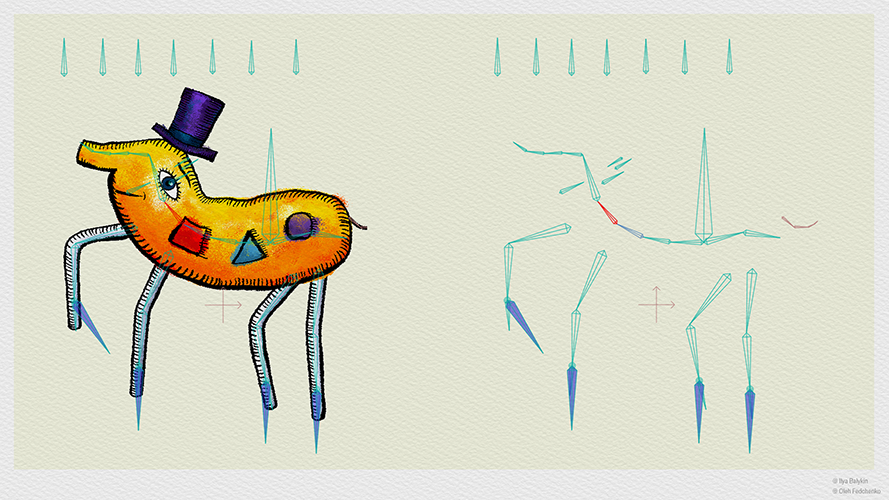 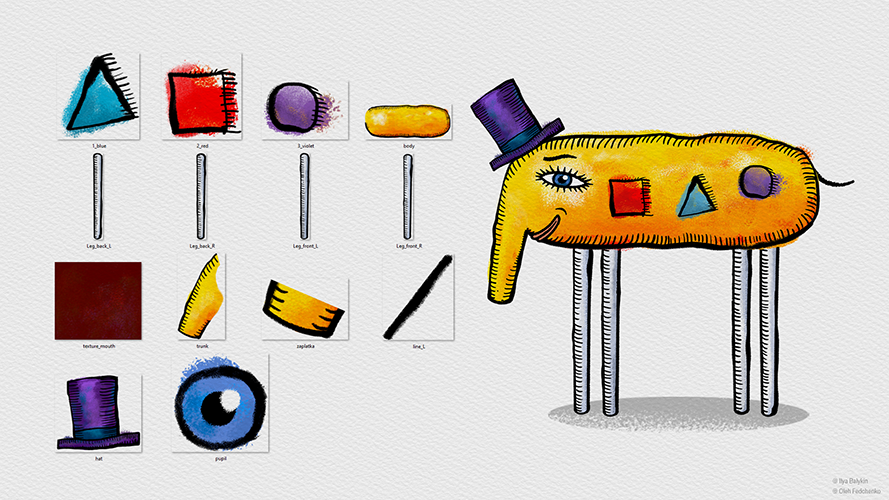 After a series of tests, an internal decision was made: the characters will be completely textured, with good skeleton plasticity, but at the same time, we wouldn’t adjust the heads’ rotation from right to left, because in that case, it was almost impossible to do that with the texture. That was taken into account during the development of game scenes in the animatic.

A total of 15 characters were developed for the film.
The overall texture size of an individual character: 9,000 pix * 9,000 pix. Such a large size was needed to work with close-ups and details (an eye, a trunk, legs, etc.).

In the process, it became clear that the “weight” of the character was affected not so much by the texture size, as by the number of bones and meshes on the character. The character consisted of textured elements, and standard means to make adjustments to the character were simply impossible; that’s why we used mesh as the main deformer.

The rigg of one of the characters can be downloaded here.

Colored backgrounds for the movie. 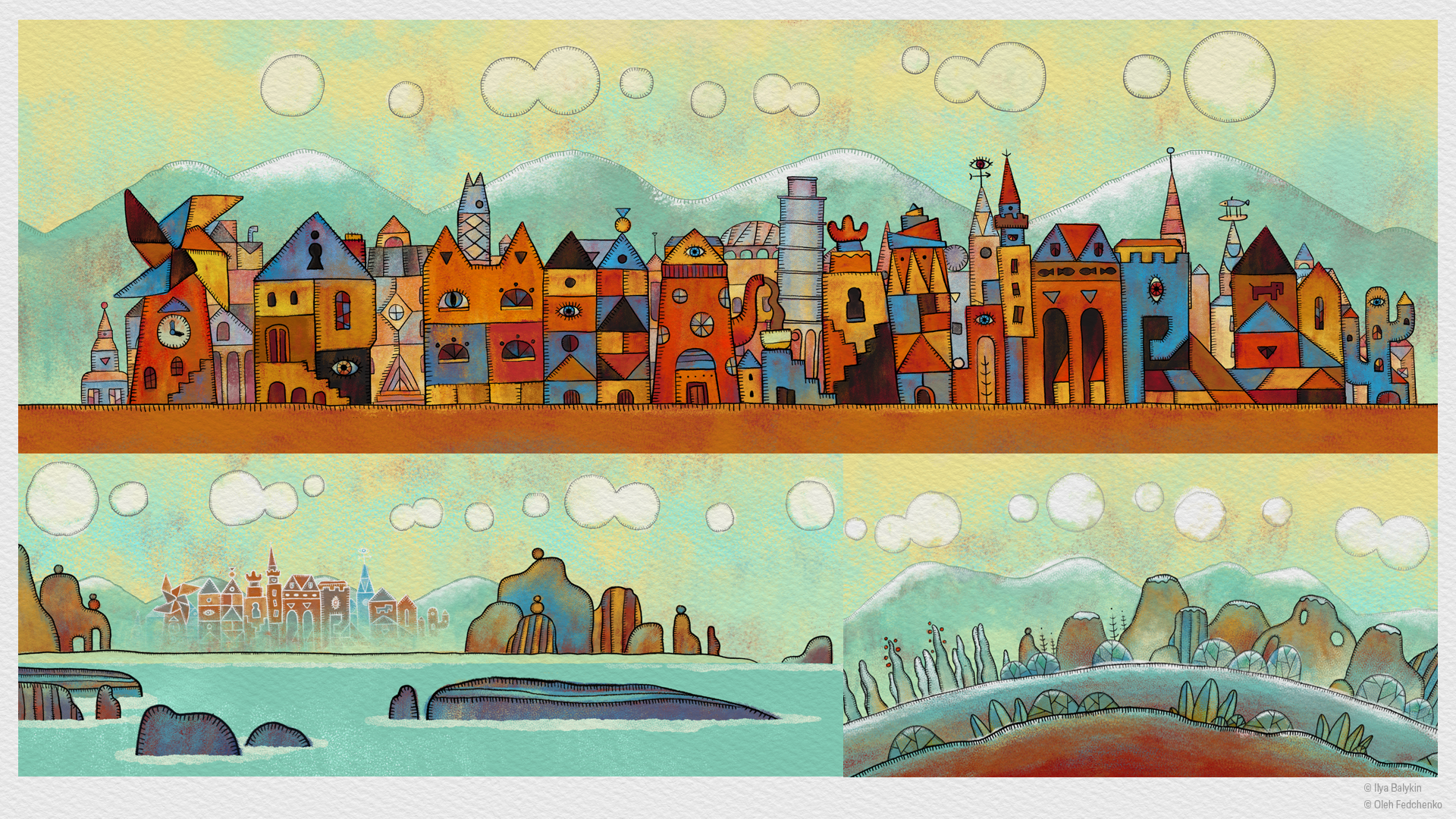 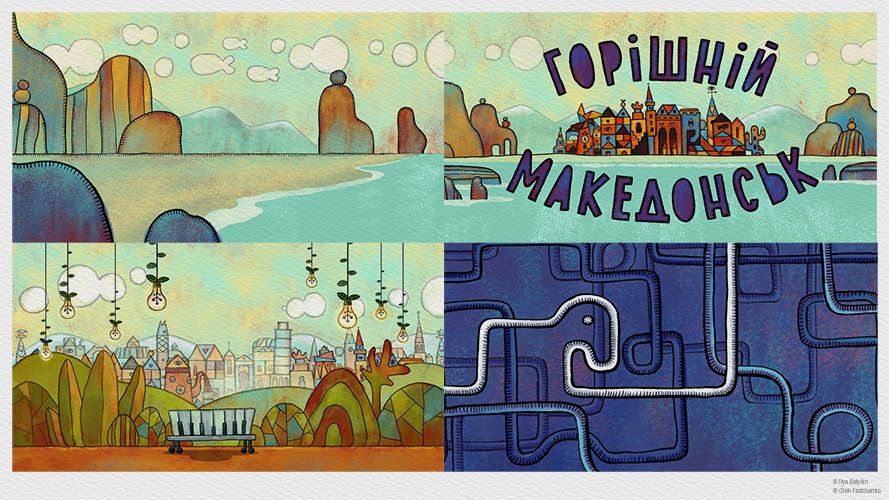 The film has many locations and panoramas. Each background was developed for the tasks of the film episode, as well as interesting things were introduced which would allow considering the illustrations by themselves, just like that. Therefore, the backgrounds, like history itself, were increasingly filled with their gimmicks.

Given that the textured animation was stylistically planned in the film, a graphic animation of the sea was also developed. 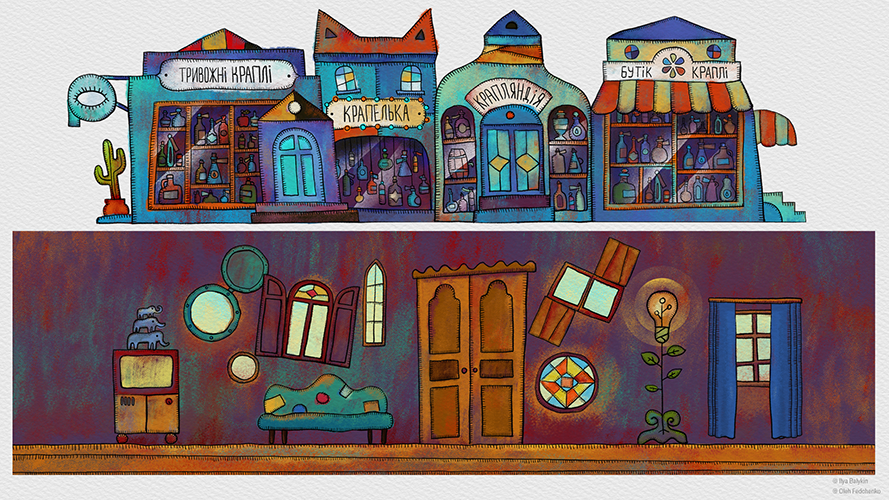 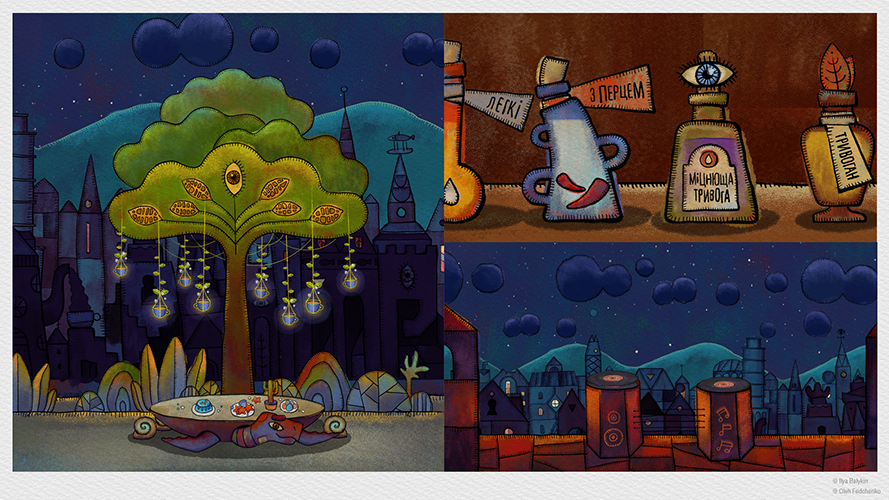 Many objects in the backgrounds were created in accordance with the developed film style (houses with ears, a sign with a trunk, a bottle with an eye, etc.).

With some elements, we came up, as they say, purely for ourselves. As, for example, with the names of “disturbing drops.”

Animators Volodymyr Tsyvinskyi, Oleh Cherednichenko, Valeriia Levenko, Viacheslav Lobas, Dmytro Lutsenko, and Ilya and I worked on the animation for the film. Given the specificity of the story, in some scenes, the main bet was made on the animators’ improvisation, for which we are especially grateful to them.

The animation was produced in the Moho program. This is a very interesting and convenient tool for the production of vector and textured animation. 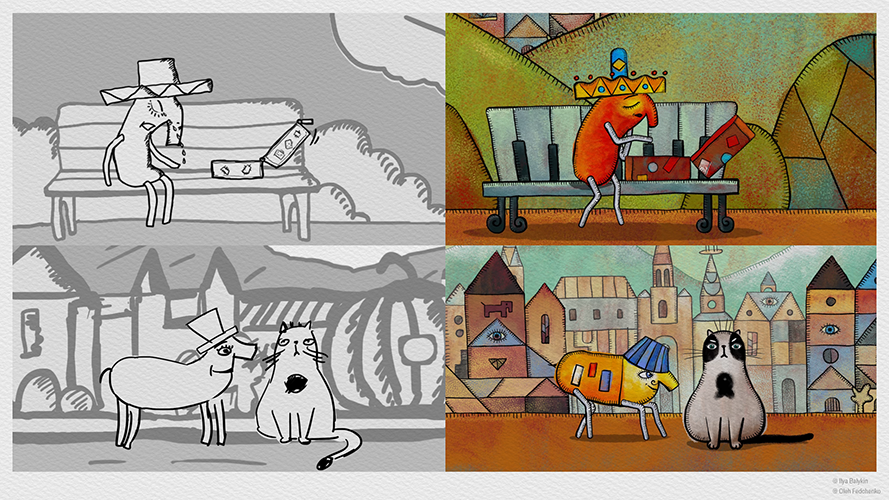 A separate part of the work was the creation of special effects for the film: flowing cocoa, bubbles, a frame with variable weather, eyes in the backgrounds, sea waves, starry sky, flickering light bulbs, and more.

Large multilayered backgrounds, textured contours, and long panoramas, unfortunately, created a rather complex compositing of the film. That significantly slowed down the work on compositing the scenes and increased the time for the final rendering of the entire film. 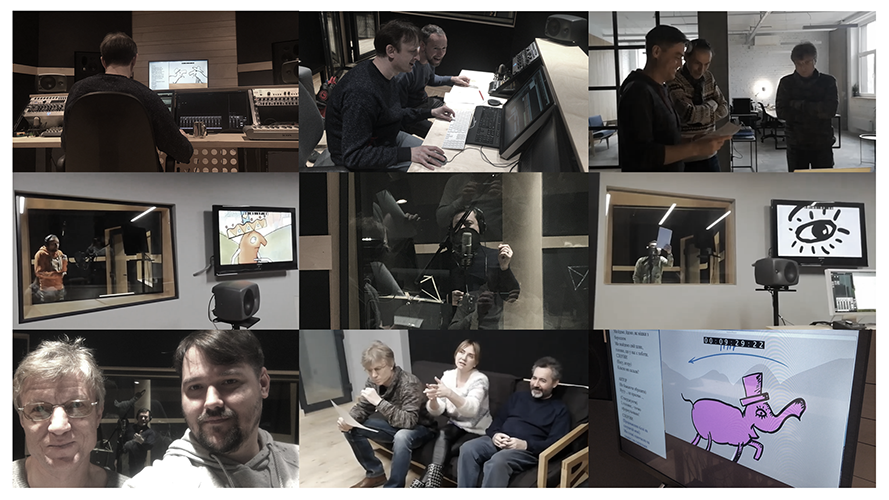 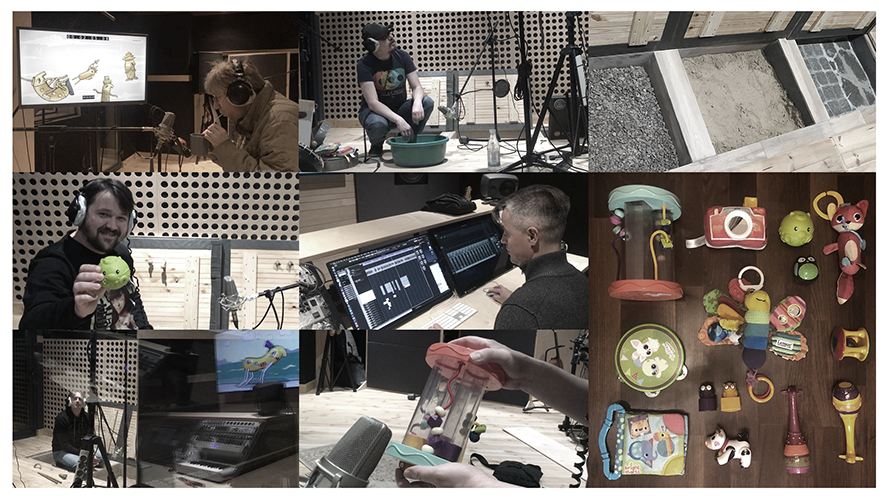 Dmytro Hudov (sound producer) and Vitalii Rozynko (composer) started working on the soundtrack for the film at the stage of auditions. The main work began when the film was already at the stage of compositing.

Several different areas of musical design of the film were proposed. Collectively, we chose beatbox as one of the major ones. Vitalii recorded songs and wrote musical compositions according to the drama of the episodes.

To record synchronous noises (a foley artist was Mykhailo Kapusta), in addition to classic working sounds (steps, bubbles, splashing water, etc.), we also used a lot of noisy children’s toys and bells. For example, the gong of Horishnii Makedonsk city was my daughter’s bicycle bell.

A clean recording of the actors (Serhii Severyn, Ivan Rozin, Yevhen Malukha) was made when the work on visuals was almost finished. We added some phrases and reactions of Slowny (they appeared while working on the animation) and rewrote the author’s game (the character named Nose) in a new manner.

All this, together with the visuals, created an amazing atmosphere of the Slowny world.

If you have any questions, please fill out the form below.